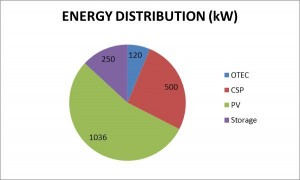 HOST PARK is home to a variety of renewable R&D and demonstration energy projects. Clients are also encouraged to use commercial solar power and other renewable technologies.  Read more on the various projects below.

OCEAN THERMAL ENERGY CONVERSION (OTEC).   HOST has established itself as a leading test facility for OTEC technology since 1974. Closed and open cycle systems, as well as onshore and offshore systems which aim to produce electricity using the temperature difference between cool deep and warm shallow sea water have been built and tested by various groups including the University of Hawaii, Lockheed Martin, Makai Ocean Engineering, and the US Navy. Projects have been funded over the years by the US National Science Foundation (NSF), the US Office of Naval Research (ONR), the Pacific International Center for High Technology Research (PICHTR), the US Department of Energy (DOE), the State of Hawaii and from private sources. HOST was the site of the first net energy producing OTEC plant. The park also operated a 250kW plant for 6 years in the 1990’s. More recently, Makai Ocean Engineering completed the construction of a heat exchanger test facility in 2011 and has since received funding to install a 100 kW turbine which will be connected to the HOST park research campus micro grid. NELHA is currently finalizing lease negotiations with OTEC International LLC for a 1 MW OTEC facility at HOST Park.

CONCENTRATED SOLAR POWER (CSP) concentrates solar thermal energy into a small area to heat a working fluid which then in turn can drive a heat engine to produce power. HOST Park’s high insolation and warm year round climate make it an ideal site for the demonstration of new CSP technology. Keahole Solar Power established its first pilot plant at HOST in 2007 to demonstrate novel concentrating solar panels that could withstand storms and thermal energy storage systems.

PHOTOVOLTAICS (PV) converts solar radiation to electricity using semiconductors. Various solar companies have taken advantage of HOST’s prime location and tested innovative PV systems. Concentrating photovoltaic pioneer, Solfocus examined the effect of marine environments on their CPV systems. HOST is the site of a new solar test bed funded by the National Renewable Energy Laboratory (NREL). The test bed will allow to compare various solar modules’ power generation and incorporation into a real world electrical grid with state of the art power monitors. Many HOST clients take advantage of the ideal insolation and close to 1.5MW of commercial PV is either installed or will be operational in the very near future.

BIOFUELS. Microalgae are the earth’s most productive and sustainable plants. HOST is one of the best places in the world to grow microalgae and consequently is home to leaders in the field of microalgae production and biofuels R&D. Over $100 million has been invested in Cellana LLC‘s 6 acre state of the art demonstration plant at HOST Park.

SEA WATER AIR CONDITIONNING (SWAC) uses cold deep seawater to cool buildings. In general,  the seawater is passed through a heat exchanger and the resulting cooled air is delivered to the buildings. The very first real world SWAC system was developed at HOST park. But the technology is now used throughout the world including Sweden, Netherlands, Canada, and New York. All of NELHA’s administrative buildings are cooled by sea water. Many of NELHA’s clients also take advantage of the significant savings provided by a SWAC system and have installed their own.

GATEWAY. The award winning LEED platinum Gateway building is located at the entrance of Facility.  The building, which features photovoltaics, SWAC, and innovative structural designs, provides space to convene and educate. It is used by the Friends of NELHA to educate the general public on green sustainable building practices, renewable energy and NELHA’s activities.